The other day, I found myself in a conversation about sports with a cashier at Costco. A moment before, he had been engaged in a conversation with some guy in a San Jose Sharks sweatshirt, and I overheard mention of an injured player. Now, my dear boys had had a difficult game the night before but to my knowledge no one had gotten hurt, so needless to say I was concerned that I might have missed something. When it was my turn to check out, I asked about what I had overheard, and it turns out Cashier & Friend had been talking about one of the Oakland Raiders. I replied “Oh, I thought you were talking about-“ and caught myself before I finished the sentence with “something important”, choosing instead “I saw the Sharks sweatshirt, I just thought...”

After telling me which specific player had been injured and receiving a negative reply to his query as to whether or not I was a Raider fan, Cashier asked me “So who’s your favorite Shark?”

To which I replied... with a blank stare. Favorite? I said I didn’t have one. He insisted that I must. When pressed, I told him the closest I could get to picking a favorite was a three-way tie between... and even then I had to pause before I said Thornton, Niemi and Murray. (Douglas, that is. No offense, Andrew.)

Thornton for being such an enthusiastic leader by example, 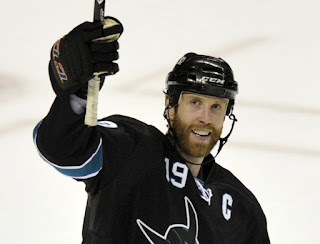 Niemi for reasons I have detailed before, 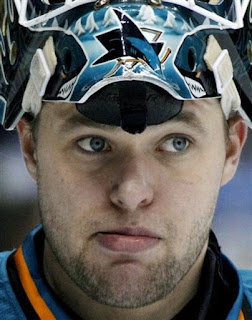 and Murray because, really, how can you not have a soft spot for this? 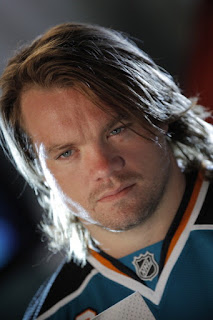 As soon as I walked out of the store, my mind started throwing out snippy little guilt-laden tidbits like you forgot Marleau, how could you forget Marleau? What, Clowe isn’t good enough for you now? Pavelski hasn’t done anything for you lately? Nice “favorites” list, if you don’t mind that you neglected to mention... and on and on until I had no choice but to head straight to the nearest mall and spend an hour looking at nothing but My Little Pony displays and layered pastel clothing with ruffles, to drive the very idea of the existence of hockey as far from my mind as possible. I was a terrible fan, and I had no right to pretend otherwise.

It wasn’t until later, when I’d had enough wine to chase the My Little Ponies from my thoughts, that I recognized the source of my original dilemma. The reason I had been so hard-pressed to name a favorite player is the very same reason I like hockey so much in the first place. It’s never about the individuals. It is, more than any other "team" sport, all about the team, both in the way the game is played and in the attitudes of the players themselves. There will always be highlights, there will always be standouts and great nights for certain players and things you will always associate with one particular guy, but at the end of the day, hockey isn’t just a bunch of people in the same game at the same time. It’s about a group acting as a single unit toward a specific goal (no pun intended, unless you cracked up in which case I totally planned that).

So, Costco Cashier, if you’re reading this, I apologize for the lie, and would now like to come clean and introduce you to my favorite Shark.