Guys I Would Not Instantly Not Leave My Guy For

So now that you know who my real competition is, I present to you...


The Guys I Would Not Instantly Not Leave My Guy For
The Blecha Brothers, Jake & Justin 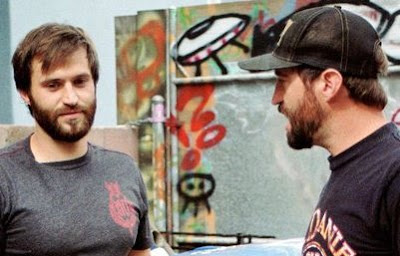 (aka “the totally hot plaid-wearing bearded carpenters from Cupcake Wars”)
If you watch Cupcake Wars, you already know what I’m talking about. If not, allow me to elucidate. The final battle of the cupcake war requires each contestant to design a display that is thematically relevant, stylish, and able to hold a thousand cupcakes. In two hours. That’s where Jake and Justin come in. Using hastily scribbled outlines of grandiose concepts from the minds of bakers whose understanding of carpentry seems at times barely equal to the task of building a rectangle out of squares, Jake and Justin build miracles. Ever encouraging and optimistic in the face of even the most unreasonable of requests, they listen patiently to what people say they want, glean from it the truth of what people really want, take that truth to the place where what you want meets what you can have, and not only make if happen but make it happen in time for the paint to dry. In two hours.

This is like the workshop equivalent of a guy asking you what’s wrong, you saying “nothing”, and him figuring out on his own what is actually wrong, saying all the right things without being prompted, repeatedly refilling your wineglass without being asked, stenciling Hello Kitty graphics on your bathroom walls to cheer you up, doing the dishes, picking up the dry cleaning, feeding the cat, screening calls from your mother and bringing you Chinese food, all the while reassuring you that absolutely nothing about anything in your life is making your ass look fat. And all the while continuing to wear plaid, have a beard, and be totally hot. 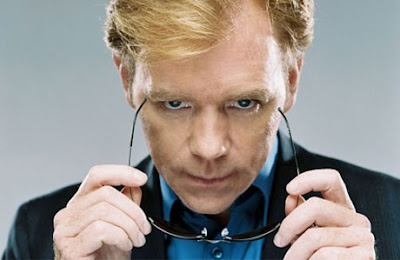 It speaks to not only the uniqueness but magnitude of his charisma that I am willing to continually overlook the forensic absurdities, forced dialogue, inexplicable insistence on the use of 5 SUVs to transport 6 people from a single office to a single crime scene, blatant emotional manipulation, complete disregard for the basics of investigative procedure, and fantastically over-engineered technical displays that are CSI: Miami, for the simple pleasure of seeing David Caruso for an hour.

Even if most of that hour is spent watching him peer cryptically through his sunglasses in darkened rooms only to remove said sunglasses when going outdoors to better convey, as only squinting cryptically in full sunlight can, what it is to be Horatio Caine, just a man, one man doing what little one man can against all the evil that Miami can spew, it is an hour well spent.

Actually, because of that it’s an hour well spent. Because he is David Caruso, and no matter what he does, he will be David Caruso doing it, and that will make whatever it is instantly and vastly superior to anyone else’s feeble attempt at performing the same action.

And like Miss Turkey’s bikini and The Rembrandts’ oft pined-for lost love, that’s just the way it is. 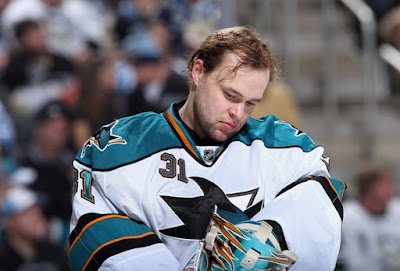 Do I even need to explain the appeal of a large man who spends his work hours carrying a stick and determinedly deflecting dense objects hurled across slick surfaces at dangerously high speeds by other equally large stick-carrying men while thousands of people scream in the background?

Okay, I will. The appeal is, your worst day has nothing on that. Some guys get pissy if you so much as snap at them to get their feet off the coffee table and stop leaving their boxers on the bathroom floor. A guy like Niemi? Your most banshee-like rants are cool waters burbling softly over age-smoothed rocks on tree-lined banks in a land that time forgot compared to what he just came from. He doesn’t need 40 pounds of gear to protect himself from stories of how much you hate Sheila in HR. You could throw a blender at his face and he’d just bat it away without even looking up from his video game.

“But”, the quibblers among you may protest, “surely you could say the same about many NHL goaltenders?”

Perhaps I could. But I do not, for two reasons. First, I am a San Jose girl loyal to my local boys. And second, Antti Niemi has a really really cute nose.

And the guy I would have to pause the longest before refusing to run away with should he ever ask... 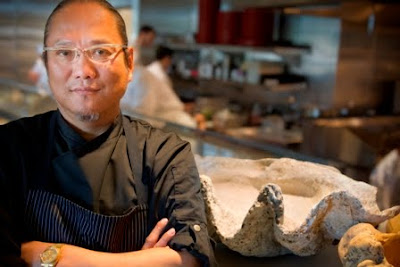 “Because he’s frikkin’ Morimoto.” –Alton Brown, in response to having witnessed yet another feat of unmitigated awesomeness on 'Iron Chef America'

There’s really not much I can say that Alton Brown hasn’t already summed up in that single quote. Masaharu Morimoto is, quite simply, cooler than most human beings realize it is even possible to be, much less stand a chance of ever being.

Give him a jar of Skippy, some Smuckers and a loaf of Bimbo Pan Blanco, he can make a five-course meal out of them before you can even finish making a sandwich, even if you don’t bother taking the time to cut the crust off.

He looks better breaking kitchen equipment than the rest of us do when using it properly.

Yeah, Alton. What you said.
Posted by Harlean Carpenter at 3:07 PM